Auckland average asking price inches up to new high of $789,581. 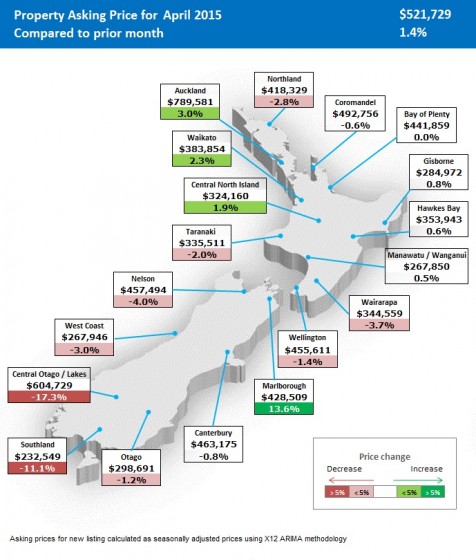 AUCKLAND, 1 May 2015 – The New Zealand property market in April continued the trend of the last four consecutive months with yet another increase in average asking price, creating a new record of $521,729, an increase of 1.4% on the previous month.

The latest monthly property data from Realestate.co.nz showed that Auckland, where the average asking price rose by 3% to a new high of $789,581, continued to be the main driver in the overall national increase – no other region experienced a new record in average asking price in April.

Significantly, the number of new listings was the lowest recorded for April by Realestate.co.nz, with only 9,673 coming on to the market, a fall of 5.6% on the same time last year, and a decrease of 18% from March. In addition, the national average in overall inventory* of available housing stock for sale fell to an all time low of only 21.3 weeks in April. The previous record low of 21.4 weeks was set in January, while the long-term national average is 36 weeks.

CEO of Realestate.co.nz, Brendon Skipper says, “The drop in listings coupled with the record low total inventory shows that sellers in many parts of New Zealand are experiencing very favourable conditions. As a result, robust average asking prices continue to be maintained at record levels, and the market appears to be meeting them.”